Good timing in tennis would be the coordination of the execution of a shot, a stroke, with the ideal moment in which the ball reaches the most favorable or unavoidable position to strike it back.

That would certainly have to agree with the person’s perception of those components and his ideas both in respect to his stroke technique and of the ideal zone and time to do it. 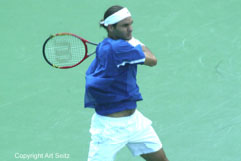 Roger Federer, one of the best of all time

Time, unbelievably, is dependent on the way you operate. If the player is in the Zone, he sees time, and the ball, as slow. If the player is thinking, thus employing the computations of the mind, he would see the same ball as fast.

Let me go a bit further. Have you ever experienced a moment or an event in which time seemed unusually slow? It could be while practicing a sport, while running for some time, at home while relaxing, or perhaps when looking at a beautiful scenery or a rose sparkling with the morning dew.

I have experienced this Zone and I have spoken to many players about it. One of my students was so much in the Zone that she actually said that she had seen the ball stop before hitting it. Amazingly, Andre Agassi has said similarly in a media interview.

For the casual observer watching a professional match, tennis would seem a fast game. He would be utterly surprised if he found out that the experienced top pro could be seeing it as a slow game. Not only the pro’s perception is different, but he also knows that the ball loses, in flight, a high percentage of speed.

People, in general, as a part of life, record about 30 pictures per second of what they are observing. That could be called the person’s mind and usual memory, which is generally used to predict and decide. If you look at a film you enjoy a series of motions that appear as a continuous movement, as a continual stream. If you slow down the film considerably, let’s say below 30 frames per second, you see the pictures individually and jumping up, one to the next.

This aspect of the “mind” could be called your internal clock. It seems to control your sense of time.

What would happen if you could shut off this “mind” and just look? In other words, no attention to the mind at all. With your internal clock shut off, what would be your perception of “time”?

In tennis you would see the ball as slower than usual, experienced in different degrees perhaps, according to how deeply you are in the Zone. It is a simple process, perhaps not easy to achieve, which I bet is experienced by almost everyone at one point or another in life. Many of my friends and students have had experiences like that.

We are so used to “thinking” that it conspires, for many, against this process of “letting go”. But there is a clever way to help the “thinking” and the “mind” quiet down (initially voice it, but soon do it silently): in groundstroke practice, count 1 exactly at the bounce, then 2, 3, 4, and with a bit of a pause, count 5 when you stroke the ball. Slowly you’ll find more and more time. It’ll seem as if time has slowed down.

Once you are calm and seeing the ball slower you can stop counting. If suddenly rushing or nervous, you can resume the count.

I even use this for volleys silently, 1 when your opponent hits it, 2, 3, 4, and 5 when you hit the ball. It definitely slows the ball down!

Tennis would be a beautiful sport with which to practice this state of awareness, this Zone. Drop off the many misconceptions, positions, preparations, the “thinking” to which you may be accustomed. Clear your mind, be dreamlike, loose, just look and let your feel, your instinct take over. If you are an experienced player, you already know how you want to hit the ball. For complete beginners, or players without much control, follow the simple instructions in this book as to how to find and strike the ball.

You’ll feel your body moving like when you were a kid, without thinking, with grace and efficiency, with a lesser effort that is a joy.

You can increase the feel and time of the ball-racquet contact by brushing across, like a caress. And the more you feel it, the bigger effect you cause. Every day you play, the better game you play, and the harder you can safely play.

That is what this book specializes about!

BACK TO CONTENTS
NEXT CHAPTER